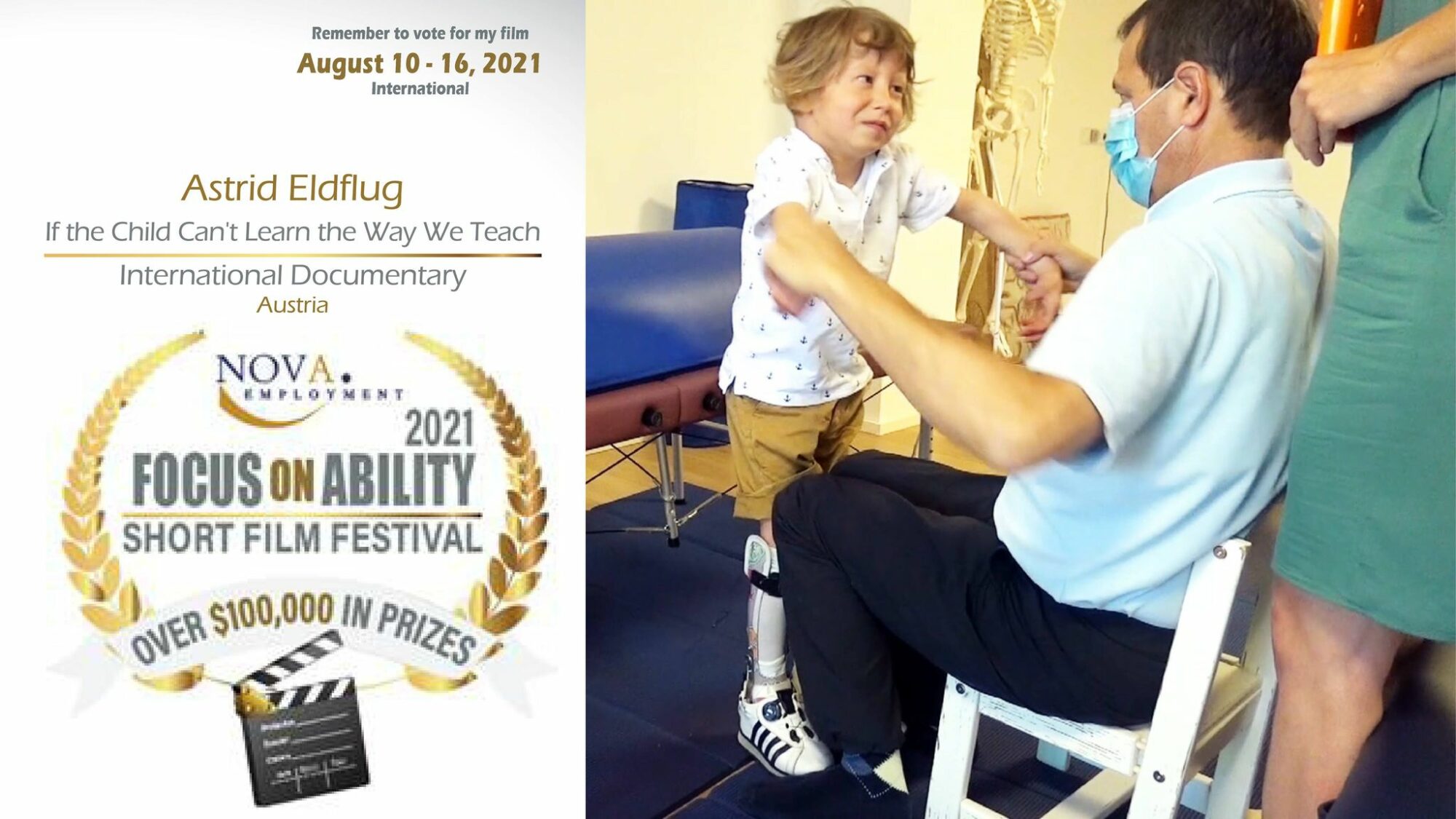 We are very excited to announce the World Premiere of Astrid Eldflug’s film “If the Child Can’t Learn the Way We Teach…” at the Australian Focus on Ability Short Film Festival 2021. Jeremy has been working with Astrid Eldflug’s son Theodor for several years and has brought him to a state in his abilities where he is able to walk. This film is a unique documentary about JKA, presenting some of the basic ideas of a respectful and positive approach towards the work with special needs children.

The film was submitted to the Australian Focus on Ability Short Film Festival 2021
https://www.focusonability.com

Read what Astrid Eldflug has to say about JKA, her son Theodor and her film.

If the Child Can’t Learn the Way We Teach…

A film by Astrid Eldflug

Synopsis
This film beautifully documents how a severely challenged child can progress far beyond his limitations. It pushes the borders of medical prognoses and shows how the impossible becomes possible if there is someone who trusts in the child’s abilities. This film is a unique documentary presenting some of the basic ideas of a respectful and positive approach towards the work with special needs children. Every child has abilities! Progress is possible! If the child can’t learn the way we teach, why don’t we change the way we teach? So that they can learn.

“So, you look at the child and you say: Where is this child now? What abilities does it have? Doesn’t matter what happened yesterday. Because change is possible in any child to progress if you know what you’re looking at, how to see the child, and understand how development happens.” (Jeremy Krauss, Director of JKA, Jeremy Krauss Approach to Child Development)

In this film, Astrid Eldflug presents some of the most important ideas of working with special needs children in a therapeutic learning situation. Theodor is a 7-year old boy with a rare genetic deletion. He is missing a part of Chromosome 5, which is called 5q14.3 deletion syndrome. He did not progress at all during the first 2.5 years of his life. He could not open his hands, could not grab toys, was unable to roll to his side, and could not hold his head. He hardly moved. But his mother has never given up her trust and hope in Theodor’s abilities. Thanks to her deep commitment and thanks to finding a special kind of movement-based therapy, Theodor has developed in miraculous ways. He took his first steps in 2019 and is surprising his mother day after day.

Statement from the filmmaker
I received the diagnosis soon after birth. My wonderful baby was missing a part of Chromosome 5, a rare genetic deletion which causes severe developmental delays. The doctors gave me a paper which described my perfect son with these words: “severe mental retardation, absent speech, and stereotypic movements”. They said he would never be able to walk or talk and sent me home. It was devastating. During the first years of his life Theodor didn’t progress at all. Thinking of him taking steps seemed ridiculous at that time. He held his hands in fists, had no eye contact, couldn’t roll to his side, and couldn’t sit, of course. He couldn’t even hold his head. It was depressing.

But then I found a unique therapeutic approach which is based on the work of Dr. Feldenkrais, the Jeremy Krauss Approach of working with special needs children. Jeremy is a genius of observation. Instead of focusing on Theodor’s obvious limitations as physiotherapy used to do, Jeremy was rather looking for Theodor’s abilities. Jeremy’s way of working with special needs children is the most respectful I have ever seen. His understanding of movement is truly impressive.

Biography of the filmmaker
Astrid Eldflug was born in a small town in Austria, Europe. She studied at Vienna University and has a Masters’ Degree in Gender and Diversity Studies. She has always been interested in photography and taking films. At age 28, she gave birth to a son with a rare genetic deletion. Having a child with special needs has drastically changed her life in various ways from one day to the other. She is caring full-time for her son. As the therapies for her son (Jeremy Krauss Approach, Advanced Biomechanical Rehabilitation) are not covered by insurance, Astrid Eldflug is constantly looking for funding and therefore organising charity events in Austria. “If the Child Can’t Learn the Way We Teach…” is her second film.

5q14.3 deletion syndrome
5q14.3 microdeletion syndrome is characterized by severe intellectual disability, absent speech, stereotypic movements and epilepsy. Unusual facial features include high broad forehead with variable small chin, short nose with anteverted nares (nostrils that open to the front rather than downward), large open mouth, upslanted palpebral fissures (outside corners of the eyes that point downward), and prominent eyebrows. The condition is caused by mutations affecting the MEF2C gene and deletions in the q14.3 region of chromosome 5.
https://rarediseases.info.nih.gov/diseases/12166/5q143-microdeletion-syndrome

The event is finished.

We use cookies on our website to give you the most relevant experience by remembering your preferences and repeat visits. By clicking “Accept”, you consent to the use of ALL the cookies.
Cookie settingsACCEPT
Manage consent

This website uses cookies to improve your experience while you navigate through the website. Out of these, the cookies that are categorized as necessary are stored on your browser as they are essential for the working of basic functionalities of the website. We also use third-party cookies that help us analyze and understand how you use this website. These cookies will be stored in your browser only with your consent. You also have the option to opt-out of these cookies. But opting out of some of these cookies may affect your browsing experience.
Necessary Always Enabled
Necessary cookies are absolutely essential for the website to function properly. These cookies ensure basic functionalities and security features of the website, anonymously.
Functional
Functional cookies help to perform certain functionalities like sharing the content of the website on social media platforms, collect feedbacks, and other third-party features.
Performance
Performance cookies are used to understand and analyze the key performance indexes of the website which helps in delivering a better user experience for the visitors.
Analytics
Analytical cookies are used to understand how visitors interact with the website. These cookies help provide information on metrics the number of visitors, bounce rate, traffic source, etc.
Advertisement
Advertisement cookies are used to provide visitors with relevant ads and marketing campaigns. These cookies track visitors across websites and collect information to provide customized ads.
Others
Other uncategorized cookies are those that are being analyzed and have not been classified into a category as yet.
SAVE & ACCEPT